On September 4, 1929, a night of celebration turned into tragedy for Mexico City’s most decorated luchador. Emilo Rafael Buenaventura Guzman Jimenez Rodriguez Rodriguez de la Cruz, sometimes known affectionately as "El Guapo," was scheduled to wrap up his celebrated career with a fight for charity: A church-sponsored benefit to raise funds for orphan children in the capital.

The plan included signing autographs for adoring fans, after which he and his daughter Lupita would run off to celebrate her fifth birthday on a ferris wheel ride. Instead, the night ended tragically, setting off Lupita on a 20-year path of vengeance and rage.

Our story begins with Lupita on her way to Valdosta, Georgia to investigate the latest lead in an effort to track down her father’s assailant. Rumors reached her that "El Super Malo" had been living incognito in Valdosta, Georgia... 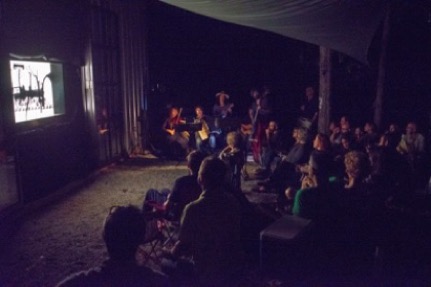 Story is meant for adults and adolescents. There are some adult themes of vengeance, a knife fight, and one mild decapitation; but it's all artistically portrayed. If your child can disembowel gladiators during endless hours of video game fun ... then your kid will probably think that we are downright quaint.
The High Museum of Art, Atlanta, GA.
Photo: David W. Batterman

Link
Link
Link
Two years in the making, “Lupita’s Revenge” is our new, 45-minute shadow-puppet play created by an alliance of musicians and visual artists from Athens, GA. The vengeance play features a live soundtrack of Latin American classics performed by a five-piece band. Now on our fourth year of touring, we are currently booking 2022 shows for museums, galleries, universities, and black box theaters.
Written and Directed by
Abel Klainbaum